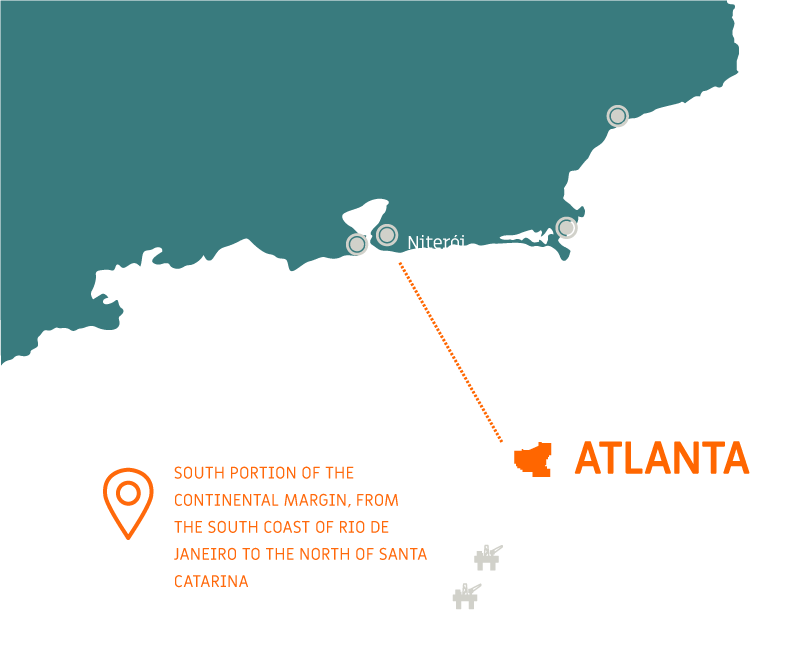 OF INTEREST AS OPERATOR

One of the most promising exploration and production areas in Brazil;

Atlanta stands out in the domestic E&P scenario

Our performance as a deepwater operator, as well as the only private Brazilian company operating
in the Santos Basin pre-salt exclusion zone, consolidates our experience and prominent position in Brazil’s oil production.

Its challenging nature makes the Atlanta Field highly unique; we combine technology and experience to ensure its successful production.

Located in Block BS-4, in the Santos Basin, 185 km off the Brazilian coast, with total oil volume estimated at 2.1 billion barrels, Atlanta was our second farm-in agreement after our IPO in 2011. With an investment of US$157.5 million, we acquired a 30% interest in the Block as well as its operation.

The field began producing oil in May 2018; and taking into consideration the two producing wells equipped with wet Christmas trees and submarine centrifugal submersible pumps, current average production is estimated at 13 kbpd. This production estimate applies until the third well of the Early Production System (EPS) starts operating in the second quarter of 2019.

Production systems and an unprecedented combination of technologies

The Development Plan for the Atlanta Field, developed in 2012 and approved by Brazil’s National Petroleum Agency (ANP), consisted in an Early Production System (EPS) that was active for three years, followed by a Full Development System (FDS). With the technical innovations provided by the EPS, we were able to establish a partnership with Finep in the amount of R$266 million. The technology available was not enough to explore the field, but we combined systems and tools in an unprecedented manner to kick-start the production.

EPS includes drilling up to three producing wells connected to an FPSO (Floating Production, Storage, and Offloading Unit) with the capacity to produce up to 30,000 barrels of oil per day (kbpd) while FDS considers drilling additional wells, totaling a system with 12 horizontal wells connected to an FPSO with the capacity for 80 kbpd. The development area covers 115,920 km².

Oliva Field – the future is on its way

Olivia Field is also located in Block BS-4, 17 km from the Atlanta Field. The Development Plan considered drilling a well for Reservoir Data Acquisition, followed by a test to verify the estimated reserves and to support the production curve. We also expect to drill five production wells and three injection wells, all horizontal, to be connected to the Atlanta Field facilities. Oliva is expected to start its production oil in 2021.

Location: south portion of the continental margin, from the south coast of Rio de Janeiro to the north of Santa Catarina.

One of the most promising exploration and production areas in Brazil;
First oil from the Early Production System (EPS) produced in May 2018;
Sale agreement signed with Shell;
Operator with a 30% interest;
Heavy oil: 14º API;